The Security Challenge for the Dynamic Enterprise

Cloud computing, virtualization, software-defined networks and mobility are transforming the data center, enabling data assets to be scattered everywhere, both inside and outside the enterprise. In fact, over 50 percent of workloads in the data center are now virtual. This creates tremendous cost savings and IT agility but brings with it sweeping security challenges that legacy hardware-centric security models cannot effectively address. Additionally, virtualization and cloud have changed the nature of traffic flows themselves –83 percent of traffic now travels “east/west” within the data center, never being seen by the traditional perimeter, creating an entirely new dynamic for today’s agile enterprise.

Advanced attackers now exploit these critical gaps in visibility and control inside the data center, with the average living inside enterprise networks for 243 days before detection.* Attackers are finding ways past the traditional perimeters by attacking low profile assets, then moving laterally across the data center to critical enterprise assets to siphon off company and customer data. Stopping the seemingly endless wave of data breaches requires a fundamentally new approach to data center security. An approach architected from the ground up for the cloud and one that protects critical assets wherever they reside – a Data Defined Perimeter. 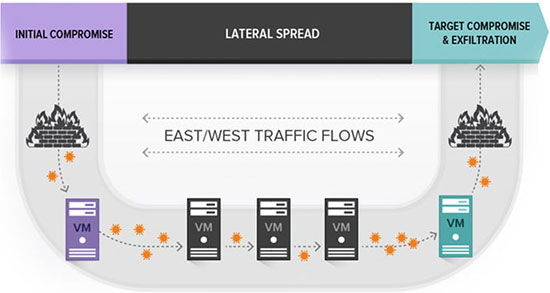 vArmour solves the data center security challenge by protecting enterprises and service providers from advanced attackers and lateral moving threats across physical, virtual or cloud environments. Built for the cloud world where traditional perimeters have disappeared, vArmour’s data center security solution breaks the cycle of malicious attacks and security breaches by delivering a consistent layer of visibility, control, and threat defense across the Data Defined Perimeter - wherever your data resides - thus removing the gaps in protection inside the data center.

With vArmour, enterprises and service providers can understand an attack’s progression across the data center, identifying both the extent of the compromise as well as the “Patient Zero” – the attacker’s point of entry into the network. The vArmour data center security solution provides distributed sensors and enforcement points in a single logical system that scales horizontally, delivering superior security with simple operations. This revolutionary approach provides organizations immediate insight, within minutes of installation, into their data center risk profile, as well as the tools to control and prevent breaches without requiring changes to their existing
policies or IT infrastructure. vArmour’s data center security solution delivers a converged set of forensic and enforcement capabilities including: